What is prayer?
Prayer is communication with God, and is a vital part of a believer’s walk. The basis of Christianity is God’s desire for a reconciled relationship with fallen mankind. Prayer not only brings about the beginning of this relationship, it fosters the growth of it as well. Many people think of prayer as a tool to ask God for needs in their life or for help in various circumstances they nd themselves in. However, through prayer we are able to develop an intimate relationship with the Lord.

Some may say or think that prayer is something to be done only at a certain time or in a speci c place. However, we have the ability to come to God in prayer at any time, anywhere. Paul told the people at Ephesus in Ephesians 6:18 to “pray at all times.” Though we are able to go to God in prayer at all times, it is good to have a speci c time that we set aside to pray. When a law was put into effect in Daniel 6 that no one was to pray to any god other than the king, verse 10 tells us that Daniel went upstairs in his house with his windows open toward Jerusalem and knelt three times a day “praying and giving thanks before his God, as he had been doing previously.”

Although prayer is a time for us to go before the Lord with various types of requests and petitions, it is necessary to not consume our prayer time with only making requests of God. In John 10:14, Jesus calls himself “the Good Shepherd” and His followers “the sheep” (John 10:2-3). He says that the “sheep follow Him because they know His voice” (John 10:4). If we spend all of our time speaking to God but not allowing time for Him to speak to us, how will we know His voice? In Matthew 6:7-10, Christ teaches us how to pray and says not to “use meaningless repetition,” but that when we pray, we should seek for God’s kingdom to come and His will to be done on earth as it is in heaven. In doing so, we yield ourselves to a Holy, Sovereign God.

How do I pray?
Throughout the Bible we see examples of public prayer, people gathered together with the intent of coming before God with a speci c request or purpose. However, and more often, it is something done in private between us and the Lord.

Again in Matthew 6:6, Jesus says, “But you, when you pray, go into your inner room, close your door and pray to your Father who is in secret, and your Father who sees what is done in secret will reward you.”

In Matthew 6:9-13, Christ teaches us very clearly how to pray. Using the acronym of P. R. A. Y. (Praise, Repent, Ask, Yield) and applying it to this passage can help the believer understand how to approach the Lord in prayer. 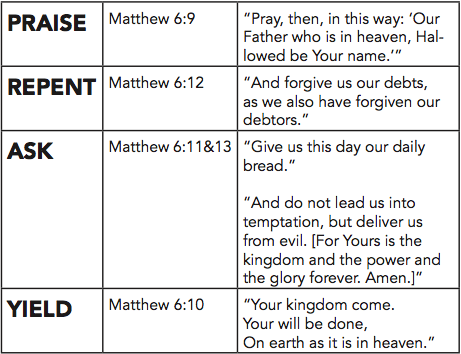 What is fasting?
Fasting is another step taken in prayer. Scripturally, we see that a fast is used for seeking the Lord in a speci c situation. We see it used in Acts 14:23 when Paul and Barnabas prayed over newly appointed elders in the church and commended them to the Lord.

A common thought when the word fasting is mentioned is that someone is going to go without food for a certain period of time. In the Bible, most fasting is from food, but not necessarily all food. In Daniel 1:12, Daniel, in not desiring to be de led by the king’s food and to serve in proving that God would sustain he and his friends, asked the king’s attendant that they be served only vegetables to eat and water to drink. We see this again in Daniel 10:1-3 when a message was revealed to Daniel. He says, “I, Daniel, had been mourning for three entire weeks. I did not eat any tasty food, nor did meat or wine enter my mouth, nor did I use any ointment at all.”

Although food is what we see most commonly fasted from in Scripture, this is not always the case. In 1 Corinthians 7:5, Paul is teaching the Corinthian believers that they should not deprive their spouses of sexual intimacy. He says, “Stop depriving one another, except by agreement for a time, so that you may devote yourselves to prayer, and come together again so that Satan will not tempt you because of your lack of self-control.” This simply illustrates the point that it does not need to be food that is given up for a fast. The object of fasting is to deny yourself a source of pleasure or distraction in order to spend additional time seeking the Lord more intently.

In Matthew 6:16-18, Christ says, “Whenever you fast, do not put on a gloomy face.” We are told that we should maintain our personal hygiene and let our fasting be done in secret and noticed only by God. Fasting is not about how spiritual you are, that would be pride and God opposes the proud (James 4:6).

Fasting is done by believers desiring to pursue God’s favor, protection, deliverance, and power (Ezra 8:21-23, 31- 32). Fasting can also be done in order to seek the Lord’s forgiveness. There is no speci ed length of time in Scripture for a fast to be carried out. Esther called for a three day fast (Esther 4:16). Daniel, as we saw, fasted for three weeks. Jesus fasted for forty days as seen in Luke 4:2. In Scripture, fasting is found to be a very useful and effective way for a believer to draw closer to God.